The financial crisis in the EU spread and prolonged, causing the consumption of textiles and garments in this large market to continue to decline. In Vietnam, for many years, the EU is the second largest export market for textiles and clothing, after the US. However, Japan surpassed the EU to become the second largest market for Vietnam’s garment and textile consumption.

For many years, the US, EU and Japan have been the traditional and key markets in the export of Vietnamese textiles and garments. In which, the US is the largest export market, followed by the EU and Japan is ranked third. In 2011, Vietnam’s textile and apparel also witnessed an acceleration in the Korean market, when for the first time textile export turnover to Korea exceeded $ 1 billion, naming Korea in the top four major export markets. of Vietnam’s garment and textile. By the end of 2012, textile and garment exports to the US reached nearly USD 7.6 billion, accounting for 44.7% of the total export turnover of the industry, the EU reached nearly USD 2.5 billion, accounting for 14.6%; Japan reached more than 2 billion USD, accounting for 12%; South Korea reached 1.3 billion USD, accounting for nearly 8%. 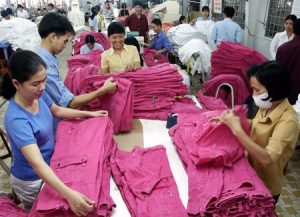 When the world financial crisis happened, the EU market was most affected. In 2011, the EU’s textile and garment import turnover was about 260 billion USD, in 2012 it dropped to 240 billion USD. Textile and garment exporting countries to the EU such as China, India, Turkey suffered a sharp decline, Vietnam was assessed to be only slightly affected. In 2011, Vietnam’s textile and apparel exports to the EU reached nearly $ 2.8 billion, in 2012, down nearly 14%, only about $ 2.5 billion. It is expected that textile exports to the EU will continue to decrease in 2013, reaching about $ 2.4 billion. Meanwhile, exports to Japan in 2013 are expected to exceed $ 2.4 billion. Obviously, this is a matter of concern for businesses specializing in exporting in the EU market.

Export data in April 2013 showed that Japan surpassed the EU to become the second largest textile and garment export market of Vietnam. From the previous very small consumption market, but with the Vietnam – Japan FTA taking effect from the end of 2009, the growth of Vietnam’s textile and garment exports to Japan has increased sharply. In addition to the advantage of enjoying preferential tax rates from the FTA, the policy of reducing imports from China is also an opportunity to help Vietnam’s textile penetrate and expand into the Japanese market. Currently, the total import turnover of textiles and garments in Japan is about 40 billion USD / year. In which, import from China is over 31 billion USD, EU is 2.1 billion USD, Vietnam is more than 2 billion USD …

According to experts, the reduction in consumption in the EU market is due to a strong impact from the economic difficulties. However, the EU is still a potential market for the world’s textile suppliers, because of the attractiveness of the world’s largest consumer market and this is also where people spend a lot on shopping. garments.

Textile enterprises commented, although exports have slowed down or even declined, many Vietnamese textile and garment enterprises still prefer to choose to be goods for the EU. Because in the export markets, Japan is famous for being a very strict market in terms of requirements and quality, requiring manufacturers to invest more in technology and quality and not all businesses have enough. conditions to meet. However, according to many enterprises, Japanese importers are very sharing with manufacturers in negotiating selling prices.

As one of the top 5 textile and garment suppliers in the world, the total export turnover of Vietnam’s textile and apparel accounts for only about 4% – 5% of the global import market share. In the US market, where the largest export is, Vietnam’s textile and apparel accounts for only about 8%, the EU only gets 1%. Among the four main textile export markets today, Vietnam already has an FTA with Japan, is in the process of negotiating an FTA with South Korea, the EU and the Trans-Pacific Partnership Agreement – TPP, with the biggest target being US market … Vietnam Textile and Garment is facing many great opportunities to expand export market share, changing the above modest numbers.