From factory fires to labor abuse, the growth of mass production in Asia has never been a problem. Last weekend, the factory collapse in Dhaka (Bangladesh) left 550 people dead and missing. The incident is raising concerns about working conditions at low-cost garment factories for the world’s leading brands.

“The wave of consumer boycott is on the rise,” said Kalpona Akter, an employee of the Bangladesh Workers Solidarity Center. blood stained dress “.

According to AFP, experts assess that Vietnam is typical for a healthy textile industry, good discipline and adequate salary. Huge brands like Zara, Mango and H&M all have products created here. 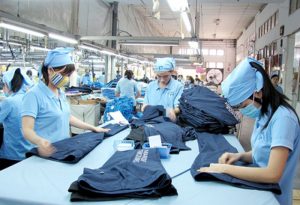 “There is no race to cut wages here,” said Tara Rangarajan, Project Manager of Better Work of the International Labor Organization (ILO) in Vietnam. “The exploitation of workers is just a short-term policy to reduce product costs. Vietnam wants to compete in the long-term in many other ways than labor costs. So they are always trying to improve the laws. “, She said. The fact is that Vietnam still attracts customers even though the labor cost is three times higher than that of Bangladesh.

Working conditions in factories have also improved over the past decade. As for the workers, they are treated with great respect, especially the skilled workers. They also have incentives like free accommodation and standard meals.

Nguyen Huu Linh has been working in a handbag factory for 18 years. He said: “When I first started working, my salary was only 40 USD (847,000 VND) a month. But now a skilled worker can earn 350 – 400 USD”. “Technology has supported us a lot. Before, workers had to do almost everything by hand. But now everything is mechanical,” Linh said. Initially, he was just a worker, but now is a line manager.

Textile and garment export turnover of Vietnam reached $ 3.1 billion in the first quarter, up 18.3% over the same period. Law expert Nguyen Dinh Huan said the “number one priority” of the Government is to promote the application of technology.

On the contrary, Bangladesh has a strategy of “maximum focus on cutting costs”. They invest in labor exploitation rather than using and upgrading technology, said Nayla Ajaltouni, Collectif Ethique sur l’etiquette coordinator. According to Ajaltouni, “The industry is growing very fast. That’s why health and safety issues are so common here.”

However, the anger over the factory shutdown could be the turning point for Bangladesh. In 2011, the increase in minimum wages for workers “was not due to humanitarian reasons but by protest protests that affected supplies. This disaster will force fashion houses to change under the pressure of media and social, “she added.

However, Abdus Salam Murshedy, President of Bangladesh Exports Association, explains that they have world-class factories. However, customers do not bother to pay attention because they want to maximize profits.

The problem is, “Consumers never know the real relationship between cheap clothing, labor abuse or health and safety standards. They are overwhelmed by their marketing technology.” Says Anne Elizabeth Moore, a famous book author.

The director of a Hong Kong-based fashion house also said the recent accident in Bangladesh “is forcing companies, whether in that building or not, to tighten their supply chains. This is very good. anyway, they cannot change the system in Bangladesh. It is the responsibility of the Government. ” He emphasized that unlike Vietnam, Dhaka never applies a policy of increasing the annual minimum wage and establishing a union.